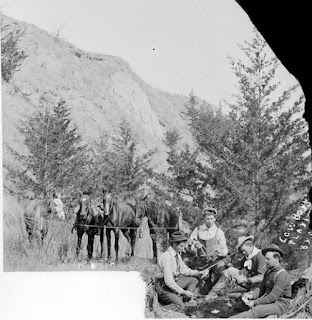 This city in Arizona was named after a hand in a card game.  What city is it? 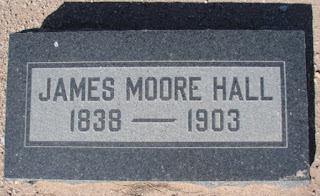 James Moore Hall was born August 1838 in Tennessee. He was the son of John Mabin Hall and Elizabeth White Moore.

James’s father died in 1864 and his adult siblings scattered. By 1870, he was married to Mary Hudson and living in the household of his brother-in-law, Warren F. Hudson.

James and Mary remained in Texas until at least 1881, with perhaps a brief sojourn in New Mexico between 1875 and 1878. This is based on the birthplaces of their children as listed on the 1880 federal census.

The Halls moved to Phoenix around 1884. In June 1899, James, Mary and their daughter Lula Bell were among the founding members of the First Church of Christ, Scientist, in Phoenix. Perhaps this afforded Mary some spiritual solace, as she died 8 October 1899 of cancer.

Following the death of his wife, Hall is reported to have suffered from bouts of despondency. In 1903, he sold most of his property to his son John, then gambled away the money he had received in the vain hope of recouping his lost fortune, and died tragically in 1903. - adapted from a story by Donna carr.

For more information on James Hall, come visit us! 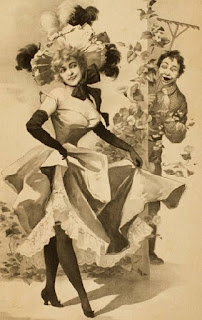 Theatrical Poster of a Burlesque Girl
Library of Congress Prints and Photographs Division Washington, D.C. 20540 USA
http://hdl.loc.gov/loc.pnp/pp.print
Edna was born October 23, 1872 in Branford, Connecticut to William and Anna Oblenis.Edna’s father died prior to 1880 and Edna’s mother, Anna, now had five girls to support.  The census showed Anna and sister Minnie were employed sewing corsets.  However they were accused of doing more than sewing.
According to Rev. Ross, a neighbor, Mrs. Oblenis and her older daughters Minnie and Helen were entertaining men.  On March 8, 1880 their house was raided and the women and three men were accused of participating in a house of “ill fame.”A music teacher who came to the house weekly stated that she never observed anything illicit going on.
Edna and her sisters became theatrical performers around 1890.  They were known for their singing and the skirt dance, popular with the burlesque shows.  The sisters used the stage name of Laziola (Lazeola), which became the name all the siblings eventually adopted.  They would tour with various theatre companies throughout the east and by 1892 were at the Original Vienna Buffet in Los Angeles, California.  Edna and sisters would arrive in Phoenix around 1894.
Edna was singing at the Palace in Phoenix, while Minnie and Annie would go to Yuma and play at The Place, which was owned by Louis Iaeger.  They would then return to Phoenix to perform at the Palace with Edna. The sisters were described as very popular with patrons at both establishments.
Edna and Annie even created quite a stir in Tucson at one point when their train arrived at the same time as two political candidates.  The two men thought all the excitement was about their arrival, but were not happy to learn everyone was there waiting for the Laziola sisters.
The sisters embarked in many other adventures in their early years, and Edna would die under tragic circumstances in 1900.
For more information, come down and see us.  We will be glad to introduce you to Edna! 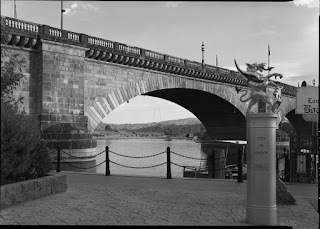 One of the 50 States owns the London Bridge.  Which one is it, and what city is it located in? 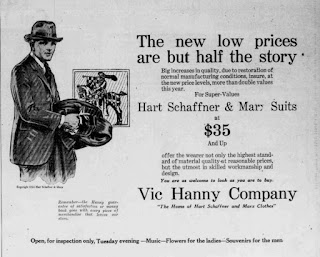 Vic boarded with the Drachman family and accompanied them to Tucson in late 1892.  This period was recorded in the book Chicken Every Sunday where Vic was mentioned as “Walter” Hanny.

Vic met Alice Hughes in Tucson and they were married October 27th 1903 in Buffalo NY.  They returned to Tucson where Vic and his partner, Phil Brannen, opened the men’s clothing store “Brannen and Hanny”.  They were also very active with the Twin Buttes Mining Company and were also partners of the Twin Buttes Railroad.

For information on the Hanny's store or Vic Hanny, come down to the PMMP! 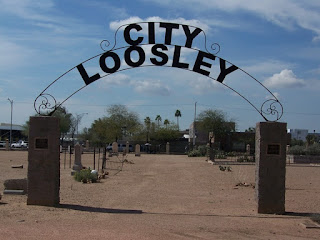 It's possible that Margaret Harris may have been buried in our City Loosley Cemetery, but we just do not know.

This Scavenger Hunt is for City Loosley Cemetery.

The answers can be found on Find a Grave.  Our volunteers have placed all of our interred on this platform.  However, we do hope you will join us in Person soon.  Good Luck!

1.  Father and daughter buried together after having died a short time between one another in 1883.

Margaret A Harris - Mysteries of the Cemetery

Weekly republican Jan 1, 1885
In researching pioneers, Mrs. Margaret A. Harris was found in the newspaper as having passed. She had a large family, and appears to be buried at the PMMP.  If you know about Margaret, or she is part of your family, please let Us know about her..  Thank you!

Email ThisBlogThis!Share to TwitterShare to FacebookShare to Pinterest
Labels: Margaret Harris, Mysteries of the Cemetery 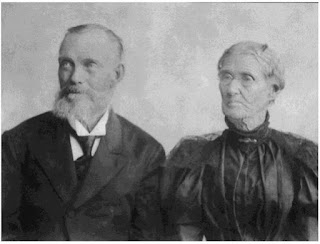 William and Jennie’s first child, a son named Eli Egbert, was born in Platte County in 1849. Three daughters and another son followed at two-year intervals.

Between 1858 and 1860, the Isaacs moved to California, where they were recorded on the federal census of 1860 for Contra Costa County. William was a farmer. Besides his own wife and five children, William was supporting his widowed mother Mary as well as several of his younger siblings. Six more children were born to the Isaacs in California.

By the 1870 federal census, the Isaacs were living in Gilroy Township, Santa Clara County, and William’s occupation was listed as ‘surveyor’. He also served as a Baptist minister and member of the San Jose Board of Education.

The William Isaac family left Salinas, California, in the spring of 1875, bound for the Arizona Territory. Arriving in Prescott, they stayed there for the summer. In the fall, William Isaac and his grown sons rode south to the Salt River Valley, where they staked out a homestead west of Phoenix.

In the spring of 1876, the Isaacs moved to Phoenix. They resided in an adobe structure at the corner of Seventh Avenue and Jackson Street while the men constructed a house on their new homestead, near what is now 35th Avenue and McDowell Road.

Among the household items the Isaacs had brought with them from California was a four-octave melodeon. On Sundays, the legs were removed and it was conveyed by buggy to the South Methodist (now Central Methodist) Church in Phoenix, where it provided music during the worship services.

To ensure that his younger children got an education, William Isaac founded the Isaac school. He assisted Captain Hancock in surveying the Grand Canal and was active in the local Masonic lodge.

William Isaac retired from active farming around 1890. He died 23 March 1900 of 'dilatation of the heart' and was buried in the Masons Cemetery. - adapted from a story by Donna Carr and Dean Isaac

Find out more about the amazing person by coming to the PMMP! 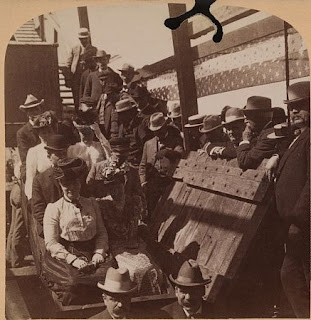 Two well known people in this photograph are descending into a 3,000 foot mine shaft to tour the Congress Gold Mine in 1901.

Arizona weekly journal-miner. [volume], June 15,1892
https://chroniclingamerica.loc.gov/lccn/sn85032938/1892-06-15/ed-1/seq-6/
Paul O. Gutike was born about 1842 in Berlin, Prussia, supposedly to a good family which afforded him an excellent education. He arrived in New York on October 2, 1862, aboard the ship St. Bernhard, hoping to find work as an architect. However, the Civil War interrupted his career plans.

Scarcely three weeks later, on October 23, 1862, Paul found himself in Company K, 53rd New York Volunteer Infantry Regiment (later became the 162nd). He may have been short of funds and enlisted voluntarily, but it’s also possible that he was more or less ‘drafted’.

Gutike had many more adventures with the military, some of them not so honorable.

By 1887, Gutike had found work as a draftsman for James Riely Gordon in San Antonio, Texas. Gordon eventually gained national renown for his Texas courthouse designs.

Gutike’s career as an architect and civil engineer burgeoned in Arizona. In 1889, Mrs. Vina Brown commissioned him to design some apartments at 4th Avenue and Adams in anticipation of providing quarters for winter visitors coming to Phoenix. In later years, he designed several commercial landmarks, and became quite well known.  Learn more about Paul Gutike at the PMMP! - adapted from a story written by Patty Gault 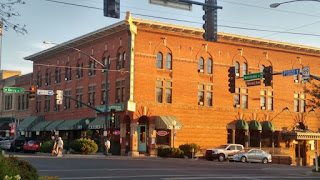 St. Michaels now stands on the corner where the Burke once stood - Val W.

Infant Berry - Mysteries of the Cemetery

Weekly Republican Jan 1, 1885
While researching, a child was discovered that could have possibly been buried at the PMMP.  If anyone knows of an infant who may have been buried in the cemetery in 1885, and was possibly a member of a family named "Berry", please let us know.  We are always trying to identify everyone.

Email ThisBlogThis!Share to TwitterShare to FacebookShare to Pinterest
Labels: Mysteries of the Cemetery, Under 18 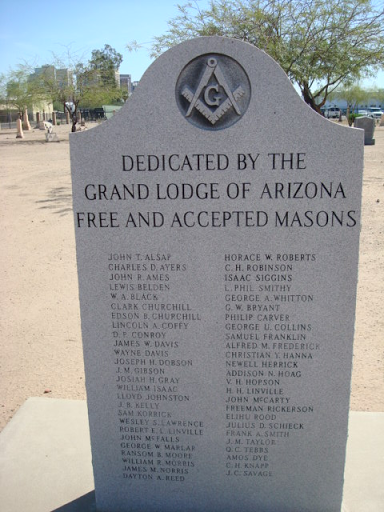 Clark Churchill was a proud Politician and buried in the Mason's Section.

Here are some other individuals who are also buried there.

The answers can be found on Find a Grave.  Our volunteers have placed all of our interred on this platform.

Can you Figure out the clues?  Good Luck!

1.  Married to the first mayor of Phoenix.

3.  Grave marker marked "Epworth League".  Fatally shot in the foot by a falling gun in 1901.  Previously had survived surgery on her skull for a brain tumor.

5.  First burial in the Masonic section, and died from ingesting morphine pills. 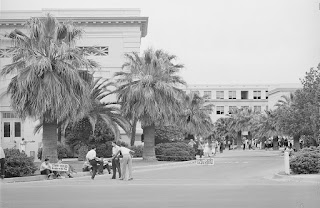 Clark Churchill was born in Pennsylvania during June 1836.  In 1861, he traveled to San Francisco where he studied law.  He was considered to be very bright.

During 1863, Churchill relocated to Virginia City, Nevada, where he became a junior partner with an established law firm, also serving as city attorney there in 1865.  Clark returned to San Francisco during 1866-1877, winning new laurels at the bar.

In 1877 he removed to Prescott, Arizona.  While there, in addition to his legal and official duties, he successfully carried through the great project of the Arizona Canal.  His business interests also prospered.

While on a professional visit to Phoenix in 1880, he was so impressed with the great resources and fertility of the soil in the Salt River Valley that he determined to take up residence there, making the development of the Valley his life’s work. He served as territorial  attorney general in 1881, dividing his time between Prescott and Phoenix.

He invested heavily in lands in Phoenix, developing the Churchill Addition and building a mansion at 5th St. and Van Buren.

Clark Churchill was a high-ranking member of the Masons, a member of the National Republican Committee, the territorial adjutant general for four years and attorney general for six years. Toward the end of his life he suffered a downturn in fortunes and eventually had to sell his mansion.  Acquired in 1897 by the City of Phoenix, it became Phoenix High School.

Churchill’s wife and two nephews are handsomely memorialized in the family plot in the Masons Cemetery, but he is not.  - adapted from a story by Bob Cox

Email Us with Questions or Stories!